Visuals for the new office 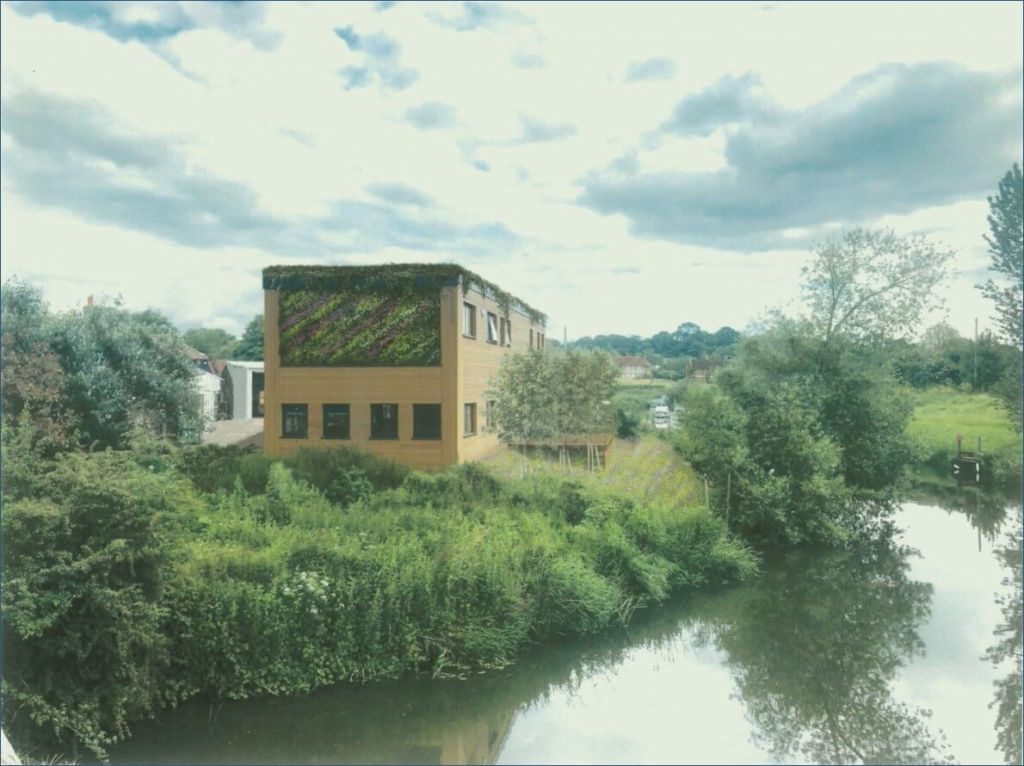 The planning application to finalise the last outstanding details (for example, the green roof and living wall) on the new offices has gone in and we now have to wait for that approval to finish the building to the high standard we are looking for. The hoarding will be replaced with palisade security fencing to match the other gate, softened with interplanting, and there will be further landscaping around the perimeter of the site. In the meantime, you might enjoy this artist's impression of what the building should look like from the bridge when all of that has been done! After a long slog with numerous delays, we are delighted to finally be moving staff into our new office building from the beginning of June. The building will house staff from 2 of the Bourne Group of companies, namely Gardenscape and John Bourne & Co. Bourne Amenity and Bourne Sport will remain in the original office building, which itself will soon undergo an internal renovation.

As most people are aware the cladding of the building was delayed substantially as we were unable to start until the Council had approved the material that we were using, and this took over 4 months. However, we have now finished the cladding and, as you can see from this photo, the scaffolding is now coming down. Once it is down the landscaping around the new building can begin. This will involve extensive ground level planting as well as the replacement of the hoarding with new gates and security fencing.

Our aim in regards to the landscaping is to soften the building within its surrounds. Once the scaffolding comes down you will notice that one part of the building has not been clad, specifically the top part of the wall facing the bridge. This is because we hope to install a living wall on that end. If we are able to do this then it will provide a beautiful aesthetic for people arriving into Newenden across the bridge from Sussex. The wall will offer year round interest, be beneficial to the environment and hopefully attract all sorts of insects and birds.

In addition we will be doing some work on the roof. Again with a view to softening the building, we plan to plant in a variety of irrigated planters. Due to the exposure to the elements at that height we will be limited in what can be planted up there, but we are working with experts who are advising us on what we can achieve.

Both the living wall and the roof planting require a further planning application. We will be submitting this soon after the scaffolding is down, when we can start working on the visuals that we will submit with our application. For this reason neither of these elements will happen immediately. Whilst we will again be at the mercy of the Planners timetable, we hope that this will be majority finished by the Autumn/Winter of this year.

We appreciate that this has been a long process, and we have been as frustrated by this as we know many local people have. However we are excited to be moving into the offices now, and look forward to the ongoing works to improve on the visual impact of the new building and its immediate environment.

The new office on the block 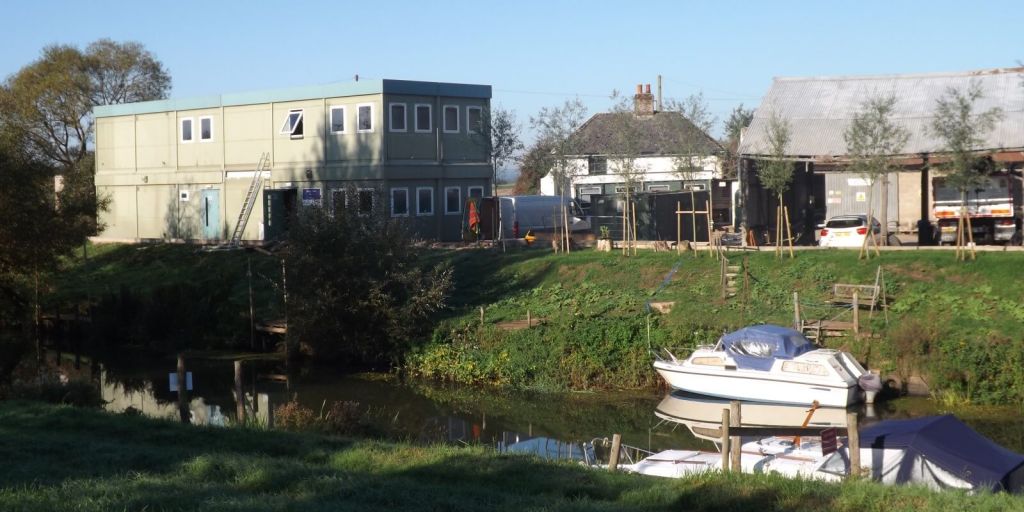 Our new office block has come into being, thanks to some spectacular teamwork by a Yorkshire haulage firm and a Kentish crane operator. As you can see from the picture above, the units fit right into the environment... well, they will do when the works surrounding them are finished. There will also be some interior changes and upgrading to be done, so it may be a little while before we can make full use of the extra space becoming available. Watch this space! 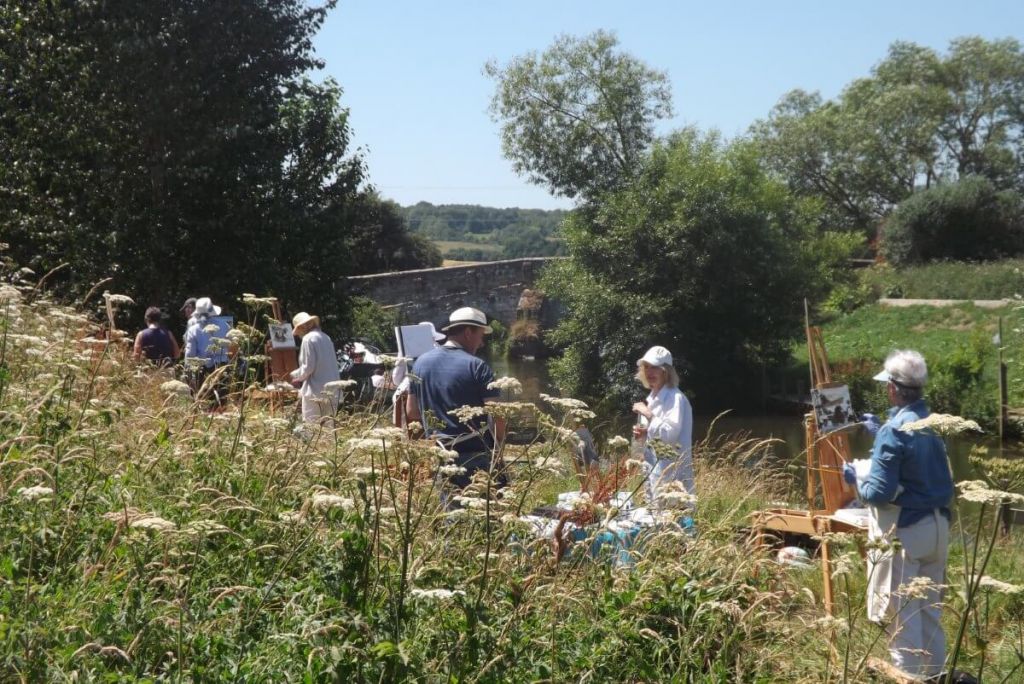 Every now and then, Gardenscape has the pleasure of hosting Fran Russell and her "en plein air" (outdoors painting) workshop on the banks of the Rother. The weather couldn't have been better on Tuesday - and it does remind you what a lovely setting we operate from.

In the background you can see the 1706 bridge, connecting not only Kent and Sussex, but also the two parts of our yard. It wasn't exactly designed for HGVs, but carries on standing up - while presenting a very popular subject for our local artists! 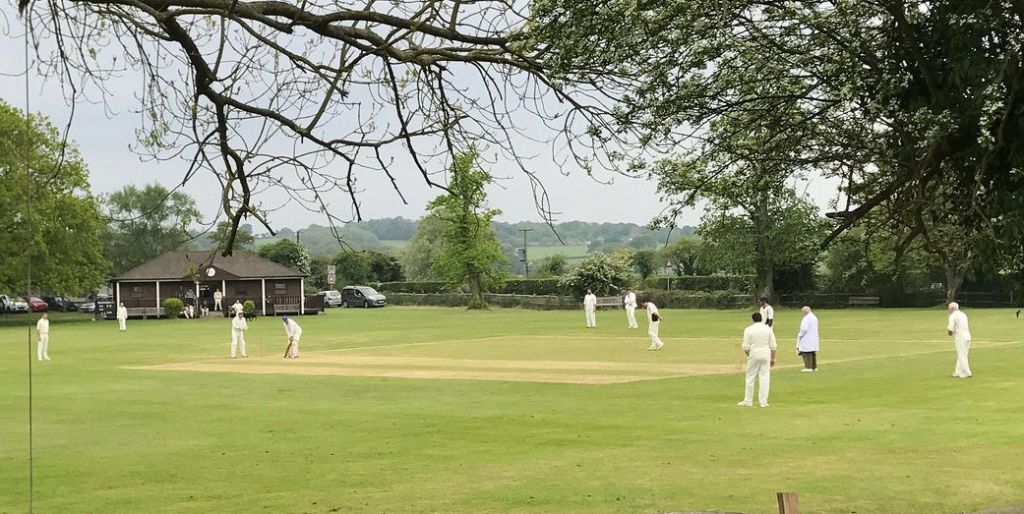