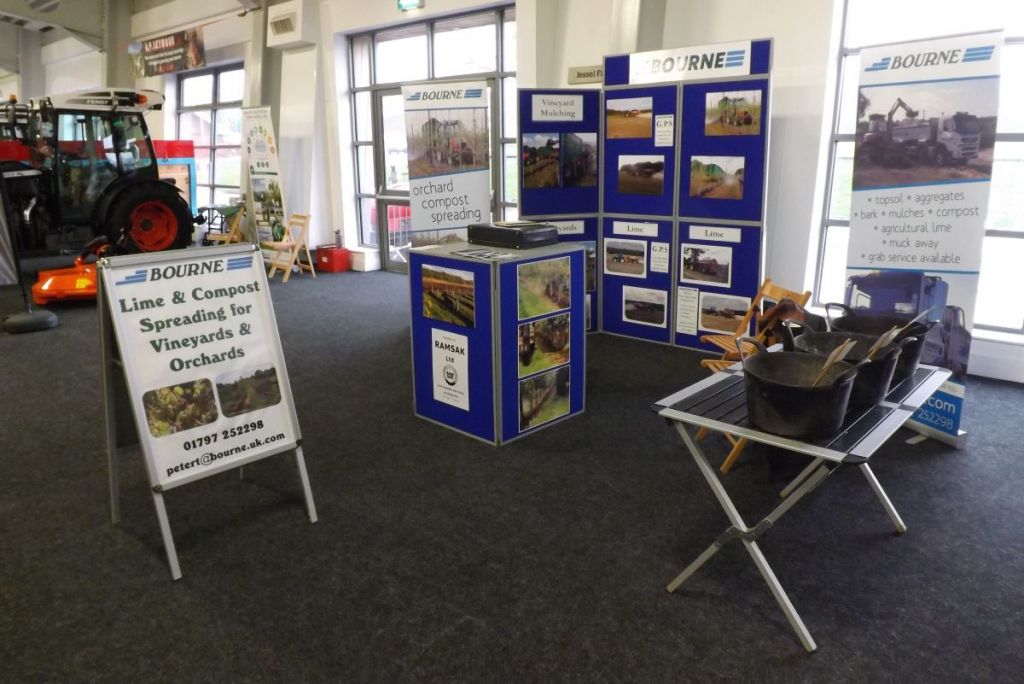 The Agri-Expo show is held annually at the Kent County Showground, near Detling. We always have a stand there, in order to keep up with the local agricultural community. Peter Traill knows everybody and it is both fun and educational to come along as an outsider.

Absolutely everything related to agriculture is on show here, from combine harvesters to smartphone apps. We have a small stand in the main exhibition hall but there are also outdoor stands for bigger pieces of machinery and other robust stuff. I did not feel particularly robust on arrival as it was cold and drizzling, and a long way to walk from the parking area, with surprisingly large snowdrifts still left over from the attention given to the North Downs by the Beast from the East. But things gradually warmed up, and with the rise in temperature followed a rise in the visitor levels. It's just a one-day show so it's important that the weather co-operates - not too good, and not too bad.

We definitely need to update our exhibition materials - the combination of old and new logos (as can be seen above) is not good. But since pictures of lorries are an important part of our display, we need their liveries to be updated first... this could be a lengthy process. Something for the marketing department to get a grip on, I feel!

I think this is a good show and worth continuing to support, but the organisers need to rethink their approach to visitor parking. It is evident that potential parking space is being withheld in case there is a sudden influx of outdoor exhibitors but that does not seem likely to happen.

The next show for the Bourne Group is the Heathfield Agricultural Show, on 26 May. That is more a Gardenscape event but the stand will have an overall Bourne flavour to it as well. Here's Lindsey and Drew looking their best at Futurescape!

It was a good show, with attendance building up as the day went on, and quite a few enquiries, interesting conversations, old acquaintances and new friends. The stand looked good and we definitely have the best sample containers in the industry! The mugs and notepads disappeared quickly - I am sure at least some people will think kindly about Bourne Amenity in the future as a result. A corner stand is a must. We were possibly facing the wrong way (having one side open towards the main entrance might have been better) but I don't think many exhibitors will have failed to see us.

The exhibition halls at Sandown Park have fairly low ceilings and can be a little bit depressing in their own right. However, when filled with people and bright stands, things liven up and of course, it is a good, easily accessible location. If only it wasn't for the dreaded M25... it took Lindsey and me nearly 2 1/2 hours to get back to Newenden, a stretch which can comfortably be done in half the time on a good day.

The organisation was very good (and I do know something about fairs organising) and we were well looked after by Eljays44 and their staff. Free coffee for exhibitors is always a winner!

Next week, we'll be at the Futurescape exhibition at Sandown Park, in Esher - stand 116. Jonathan, Alex L and I went to the NEC yesterday, for a wander round the SALTEX show It was well attended and the exhibitors we talked to seemed, on balance, quite happy with the proceedings. These days, it feels mostly like an equipment show, with a great deal of impressive machinery for doing various things to unsuspecting grass plants (and to their artificial cousins as well, to be sure). However, there were quite a few of our friends and competitors there and it was good for me to meet them and continue building up an understanding of the industry.

The next similar event is BTME in Harrogate on 23-25 January. The one thing that was consistently suggested by the people we met, was that these two events ought to be amalgamated. But of course, it's two different organising associations and, although there is a great deal of overlap between audiences and exhibitors at the two events, there may be a certain amount of institutional pride and prejudice to be overcome in order to merge the events.

It was an interesting visit but it's clear that there is no need for us to take a stand there. For one thing, the NEC really isn't a very attractive place. No big exhibition centre really can be - especially not when it is the only really big site in the country. Next week Jonathan, Peter and Richard W will be off to Cologne (for the FSB fair). Every major German city has an exhibition centre like that - it is country where they take trade fairs seriously!